Pianist David Potvin is a soloist, collaborative pianist and piano teacher based in Montréal. He has received various awards for his performances including third prize in the 2018 Shean Piano Competition and a finalist prize in the 2017 Stepping Stone competition. As the winner of the University of Toronto’s 2016 Doctor of Musical Arts recital competition, David performed for the Faculty of Music’s Thursday at noon recital series during the 2016-17 season.

A music scholar as well as a performer, David received his Doctor of Musical Arts from the University of Toronto in fall of 2020. His thesis reflected his keen interest in French music and was on the subject of Ricardo Viñes, who premiered many solo piano works by Ravel and Debussy. David’s dissertation brought new information on this celebrated musician into English scholarship. David also presented a paper entitled “Poissons d’or: a comparative source analysis” at Claude Debussy in 2018: A Centenary Celebration, an international conference in Glasgow. Other scholarly presentations include a lecture recital about the music of Claude Debussy for the Acadia University School of Music, and a talk entitled “Form as Dialogue in Chopin’s Nocturne Op. 15 no. 3,” at a U of T graduate student music conference.

Equally passionate about music education, David maintains a private studio with piano students of all ages. He has adjudicated for the Toronto Central Branch of the Ontario Registered Music Teachers Association, and he spearheaded the operation of an after school piano club at Leslieville Junior Public school in Toronto. As part of his recital performances, David enjoys talking to the audience about the pieces he performs.

At the University of Toronto, David studied with Marietta Orlov and was awarded the Simmonds Graduate Fellowship in Memory of Sara Levi Godfrey. David completed his Bachelor of Music in piano performance at Acadia University, where he studied with Ronald Tomarelli. During his time at Acadia, David was twice selected to perform at the Tom Reagan Memorial Concert, an annual showcase of faculty and select students, and was the accompanist for the Acadia University Chorus directed by Michael Caines. At Acadia, David was supported by the Minnie A. Poole scholarship in music. David also holds an ARCT in piano performance from the Royal Conservatory of Music. During his studies towards this diploma he won the silver medal for the highest exam mark in his region twice, for the grade 9 and 10 practical examinations. David has performed in masterclasses for eminent pedagogues including Martha Argerich, André Laplante, Janina Fialkowska, James Anagnason, and John Perry.

In his spare time, David enjoys watching soccer, cooking, exploring Montréal, and trying to keep up with his very energetic cat. 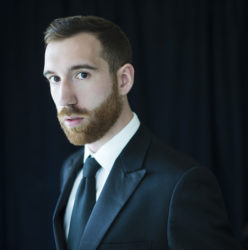