Silvia Buttiglione pursued her cello studies in Italy, at the Conservatorio di Musica N. Paganini of Genoa where she pursued her Master Degree in 2000 with honours.

She has more than 20 years of experience teaching cello, from beginners to advanced students of all ages. She has been teaching for the Conservatory of Music, Mc Ewan University in Alberta and for the Edmonton Symphony Orchestra—YONA Sistema, FACE school in Montreal and Encore! Sistema in Kanawhake.

In 2000 as soloist the Haydn Sinfonia Concertante on the occasion of the visit of the renowned Italian conductor Carlo Maria Giulini. Buttiglione then, studied at the Scuola di Alto Perfezionamento Musicale of Saluzzo and at the Scuola di Musica of Fiesole (Firenze) and joined there the Orchestra Giovanile Italiana. She has a deep interest in the Italian Opera repertoire and has participated in several master classes on Italian Opera at Spazio Musica Association in Orvieto. Buttiglione played as principal cello with many orchestras in many famous concert halls in Europe including Berlin (Philhamonia), Budapest, Munich, Leipzig (Tonhalle), Zurich, and Italy. In 2004, she played around Europe in order to promote Genoa as the European Capital of Culture. Since 2012, Buttiglione is founder cellist of the Vaughan String Quartet.

She played in several festivals and residencies around the world as the Festival de Inverno of Rio de Janeiro—Brazil, Festival MiTo in Milan, Symphony Space in New York, Quartetfestwest in Victoria (BC),Banff Centre for the Arts,  Chamber Music Festival at the Stanford University (US).

Silvia is a certified teacher of the Royal Conservatory of Music since 2014. She also has a degree in Law and has worked as a lawyer in Genoa and Milan for many years before she moved to Canada. 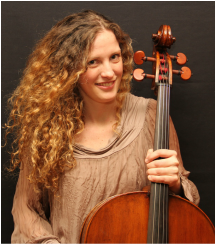